One feature that has been asked for by customers is the ability to specify column names when using the Export to File feature.

So for example, if we use an Excel source file formatted this way:

Notice spaces in Column B, the pound symbol in C, and the ampersand in D.

When we preview the data in SmartConnect, we can see that SmartConnect replaces those characters.

And as anticipated, if we use Export To File, the names we see in the Preview Data window are used as the output column header names.

While that usually isn’t an issue, if this file has to be brought into an external system as-is, now the columns aren’t named what we need them to be in the output file.

Because we cannot directly configure the column names, the easiest way to make this work is to use a “Tasks that runs if the map succeeds” task script.

In the below screenshot, we see the code window that has the code to do make this happen. 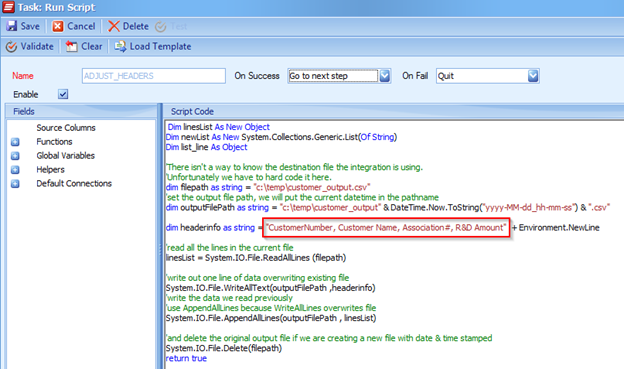 Looking at the code it:


At this point, the new output file with the correct column headers will exist and the original file will have been removed.

I would encourage my readers to vote for the suggestion to let us set the column names in SmartConnect. But until then, this method does work nicely and is pretty easy to do – especially since I did the hard work already.

Now you might notice that I didn’t address the situation if the Export To File option is set to “Excel 20XX”. That also comes up from time to time and is an interesting problem since we can’t just “read/write” like we can with the flat text file as this example uses.

You can download a zip file with the files used for this map HERE.

But that will have to be a topic for another day!