There are a few different scenarios that require different mapping options within the Analytics Distribution that we will cover in this article.

This is by far the easiest scenario to integrate as it’s a straight mapping to the fields in the Journal Entry Header, Distributions, and Analytical Distributions.

You can download the maps and sample files here.

NOTE: If you are using a text file such as a CSV or TAB delimited, I would recommend using the Create Schema option to set the Dimension and Dimension Codes to char. This will allow SmartConnect to handle any type of value without requiring a calculated field to translate a number to a string if there are a mixture of data types.

In this example, we are using a CSV file with the Bulk Data and Text File data source types. The Data Source Key Field will be the Date column to create a new Journal Entry per date in the file. 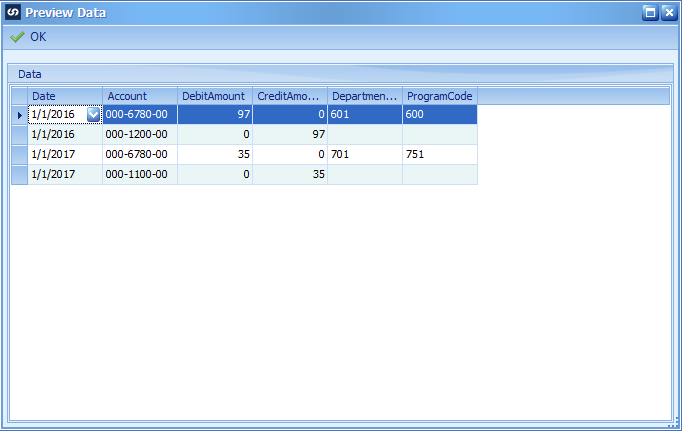 I won’t go through the standard distribution and header mappings in this example but will focus on the Analytics Distribution. The most important note is the Analytics Distribution is used for other document transactions as well as General Journals so the field names might not match to the same values that you find with each different transaction. If we don’t map the right values, Microsoft eConnect will not be able to find the distribution record for proper validation and return an error.

In the case of General Journals, the Document Number would be mapped to the General Journal number. The Document Type is always a 0 when working with General Ledger transactions so we can hard code that value. This is explained in the Microsoft eConnect documentation. In our simple scenario, the Analytical Amount will match our debit distribution amount (this example does not have AA dimensions on the credit amounts) so we wouldn’t have to map the amount field but we will typically do the mapping for consistency. 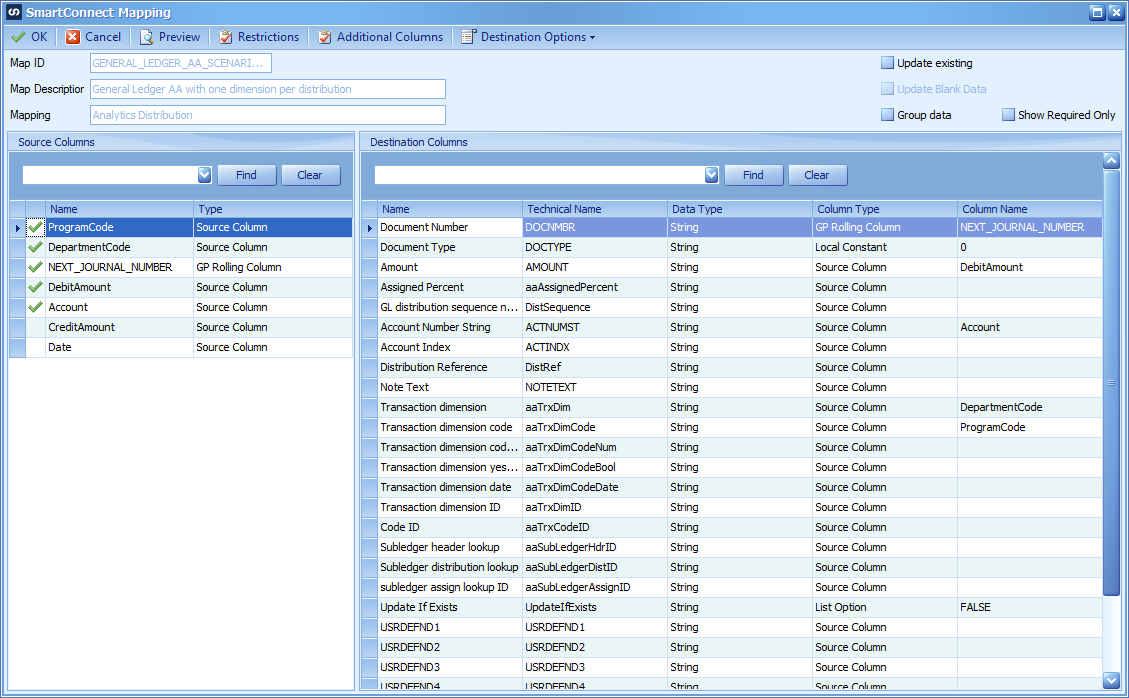 Not every distribution in my data source will have a dimension code assigned, I need to create a restriction to prevent the Analytics Node from being processed for those distributions.

With the Analytics Distribution Mapping open, click on the Restrictions button. The VB.NET code displayed here will check whether the Dimension or Dimension code is blank and restrict this distribution. 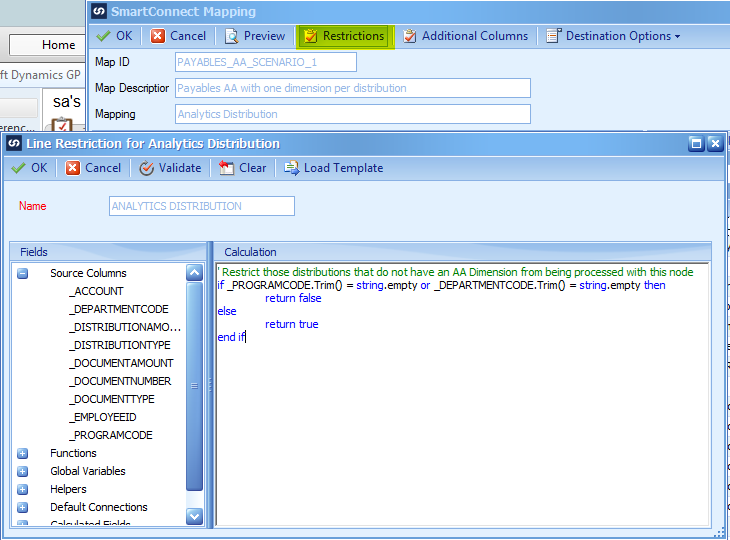 The next easiest scenario to integrate is when we have the same account number on multiple distributions and each distribution has only one Analytical Distribution. For this scenario, we need to add the distribution sequence to our mapping. Depending on your data source, the value can come from the source or calculated using a global variable. 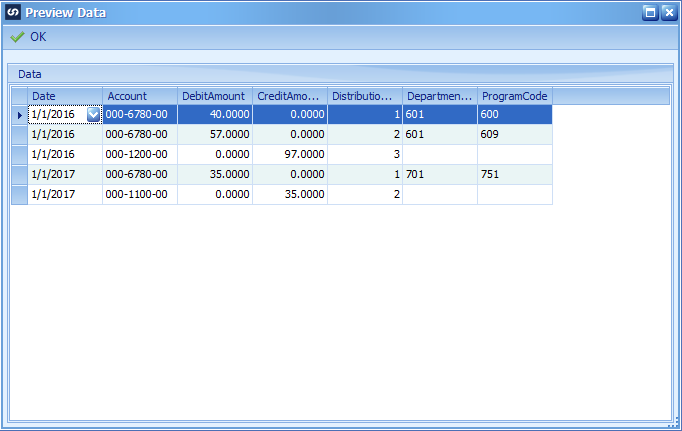 We need to make one addition to our Add Distribution node by adding the distribution sequence. 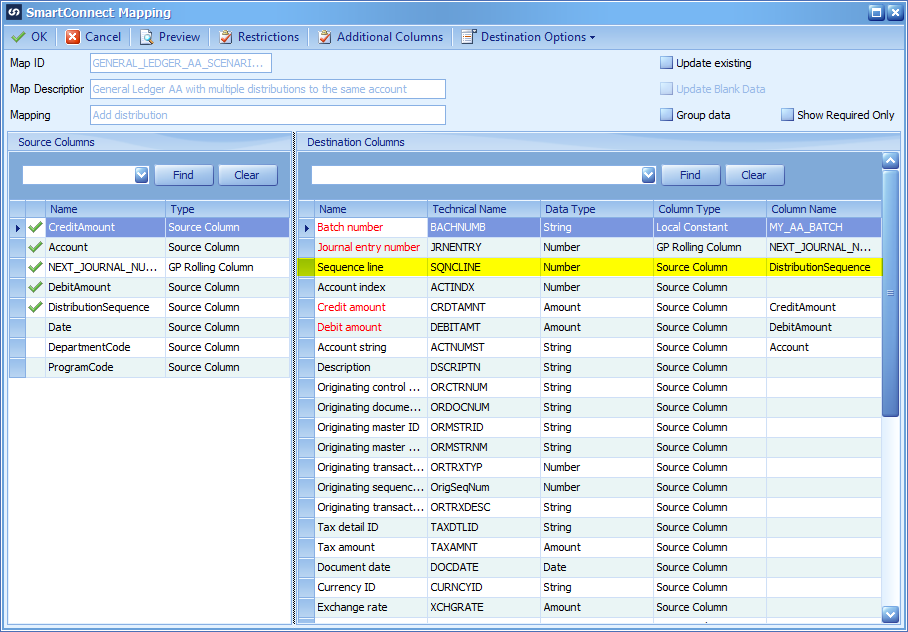 Our Analytical Distribution mapping includes the addition of the distribution sequence. Everything else within this node remains the same. 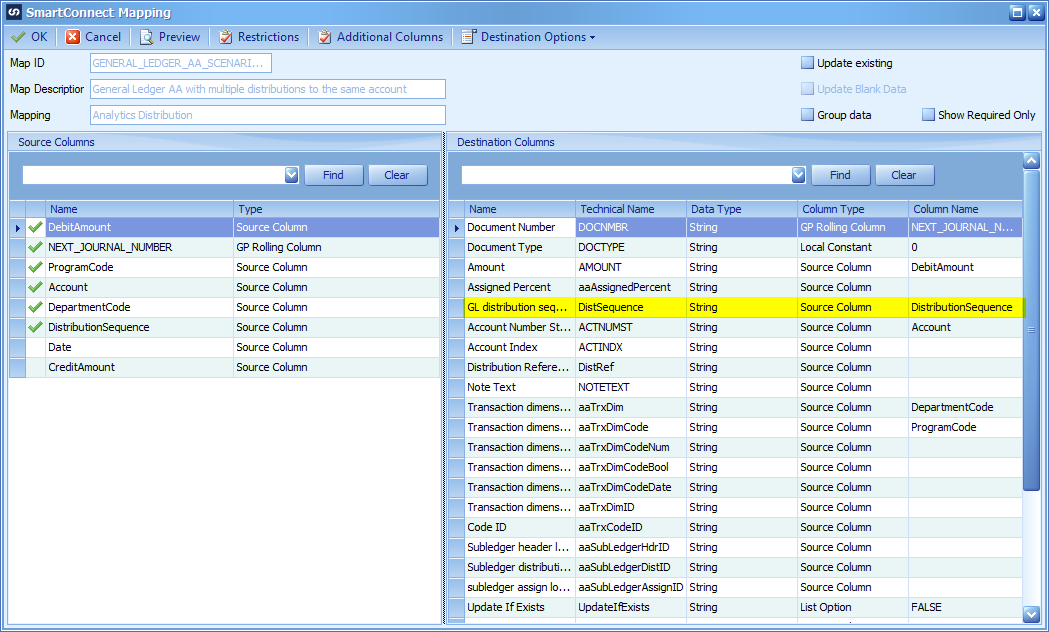 This will be the same restriction as used in scenario 1.

The next easiest scenario to integrate is when we have the same account number on multiple distributions and there can be multiple Analytical Distributions for each payables distribution. With this scenario, we need to add the distribution sequence to our mapping and an analytical sequence. Depending on your data source, the value can come from a source column or calculated column using global variables as described in scenario 2.

Here is our data source with the additional Analytical Distribution sequence number. I also separated the amounts into debit and credit columns to reduce the number of calculations needed for summing amounts on the distribution node. 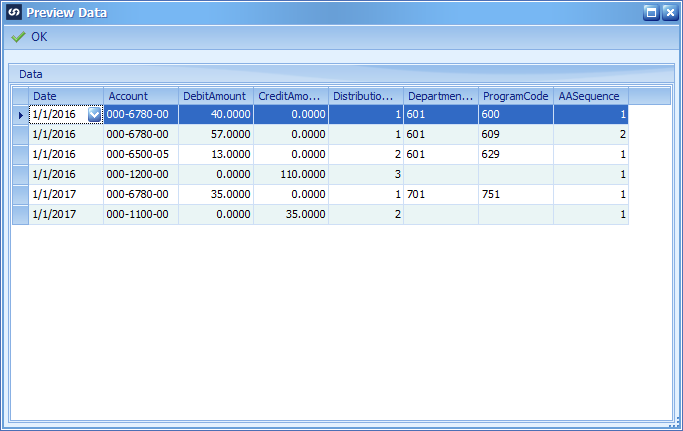 In the Add Distribution, we group on the document number and distribution sequence to create one distribution for our account or sequence. We will also sum the debit and credit amount to ensure the correct distribution amount aggregate value. 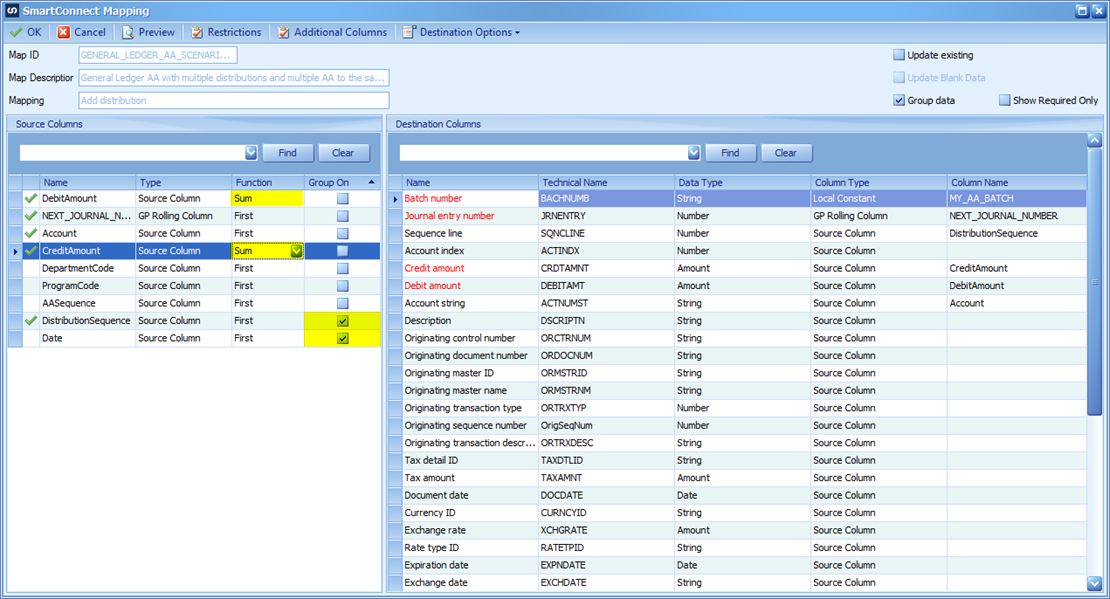 In the Analytics Distribution, we map the AASequence to the subledger assign lookup ID. 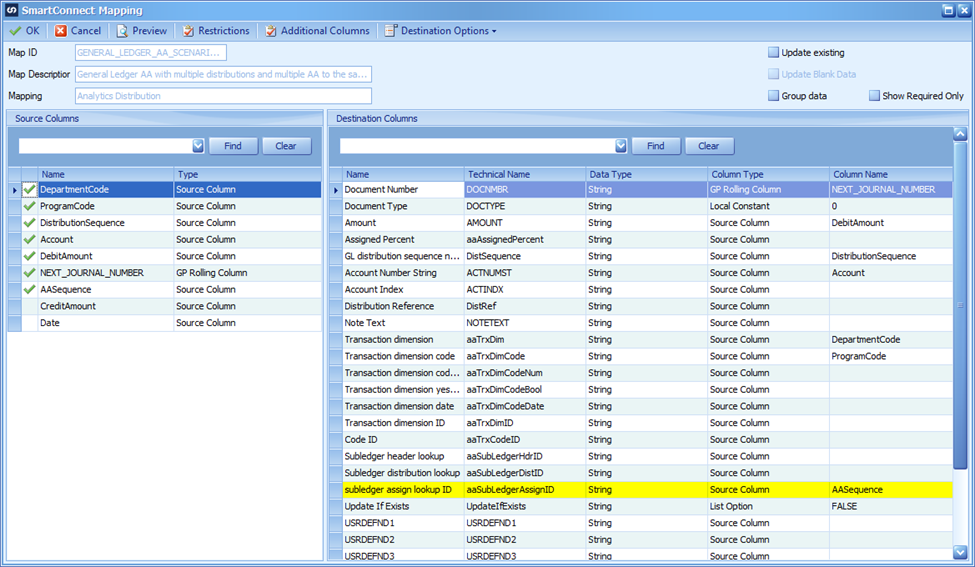 This will be the same restriction as used in scenario 1.

That’s it. All three scenarios should successfully import if you have the right data available and the Analytical codes are set up correctly.

We will admit that troubleshooting issues regarding integrating AA transactions can be difficult. If something is not mapped correctly on the analytics distribution node, the most common error you will receive is “An Item with the same key has already been added”. Unfortunately, this error is being returned to SmartConnect from the Microsoft eConnect runtime and means eConnect has generated the same error multiple times. It usually means the Microsoft eConnect taProcessAnalytics Stored Procedure cannot validate the Analytics Distribution to the matching Payables Distribution. The way we troubleshoot this issue is to use SQL Profiler to capture the text of the calls being made to the eConnect procedures and executing those procedures within SQL Server Management Studio and execute them within SQL Management Studio.

Another possible method to validate the mapping is to change the map destination to Dynamics GP – File and review the XML that is generated to verify the calculations and mappings are correct.

Here is a list of items to verify when looking at the generated XML.