Standard GP security is global, the same windows always exist in every single company. So, when you setup GP security you can create a single security task that gives access to specific windows, and then use that same security task in every company. However, Extender windows are not global, when you create Extender windows, they only exist in the company you created them in and not in all companies. You can export Extender windows, and then import into other companies, however even if they have the same names in both companies, the windows themselves are always company specific.

Most of the time people still have difficulty understanding company specific, so I must show them an example of how it works. I am going to create an Extender Window named “David” in my Fabrikam company. It’s a simple window with 1 string field on it. Here is what my window looks like in Fabrikam. 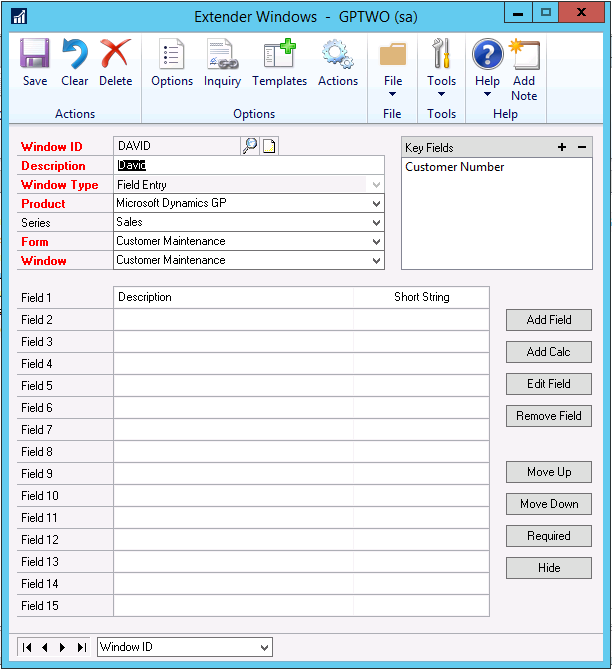 Now I go into GP security (Tools – Setup – System – Security Tasks) and create a security task for my Extender Windows. I just called the task “Fabrikam Extender Windows” and marked off my window called David. 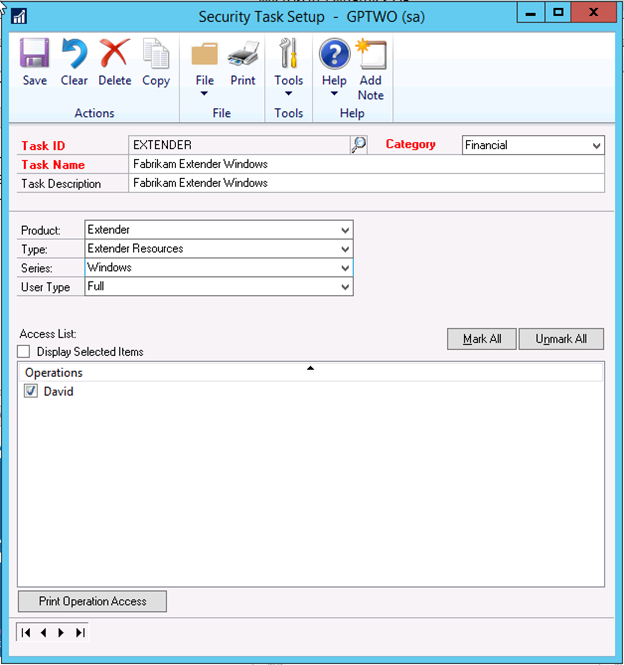 Now to prove that Extender security is company specific, change companies and login to a different company. I have a company named GP2 that I am logging into. When I open the same Extender task I just created in my GP2 company, I don’t see my Extender window in this company. That’s because the window does not currently exist in this company. 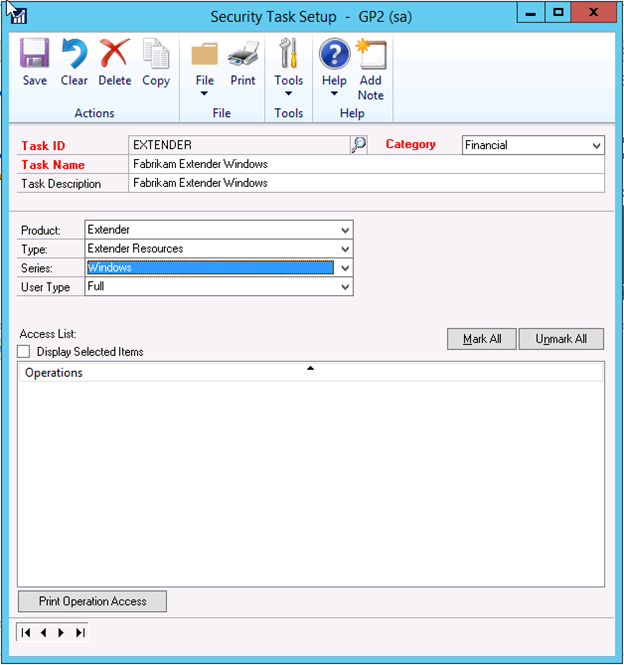 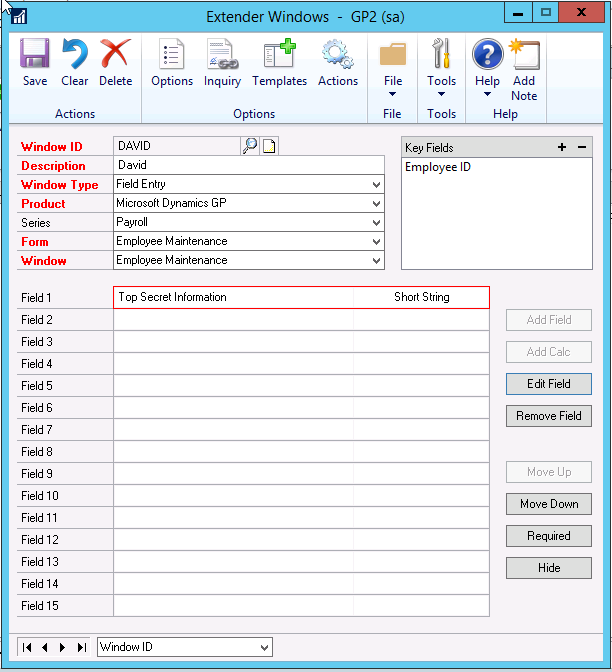 If I go into GP security in my GPTWO company, now I will see a window named David that I can grant access to. However, these are totally different windows in both companies. Here is my security task in my second company. 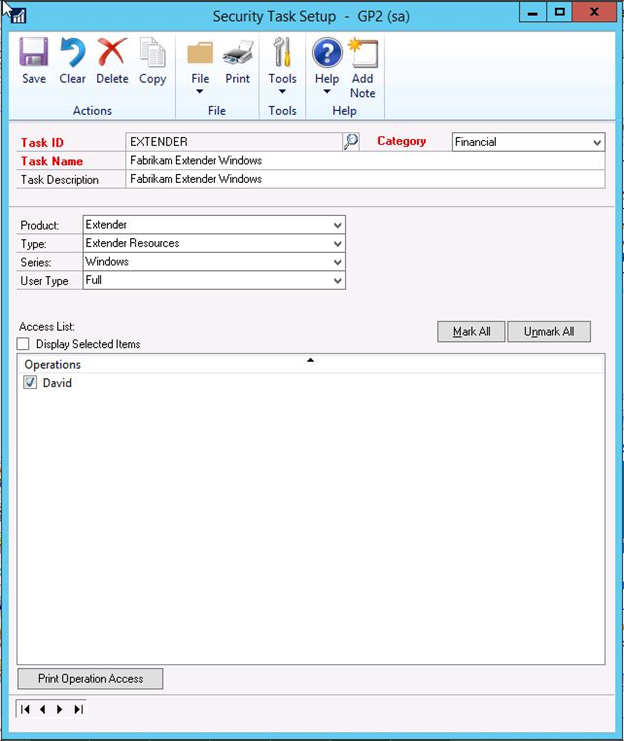 Now you can see why creating a single Extender task across companies does not work. I have a window called David in both companies. In the first company, David is attached to customers, so I want to give all my sales people access to that window. In my second company, my David window is attached to Employees, and I only want to give access to the HR manager to this window.

So, what you need to do is create a 2nd security task with a different name. I generally will append the database name at the end of the task ID. So, in my GP2 company, I am going to create a task called EXTENDER_GP2 and give access to my David window again. 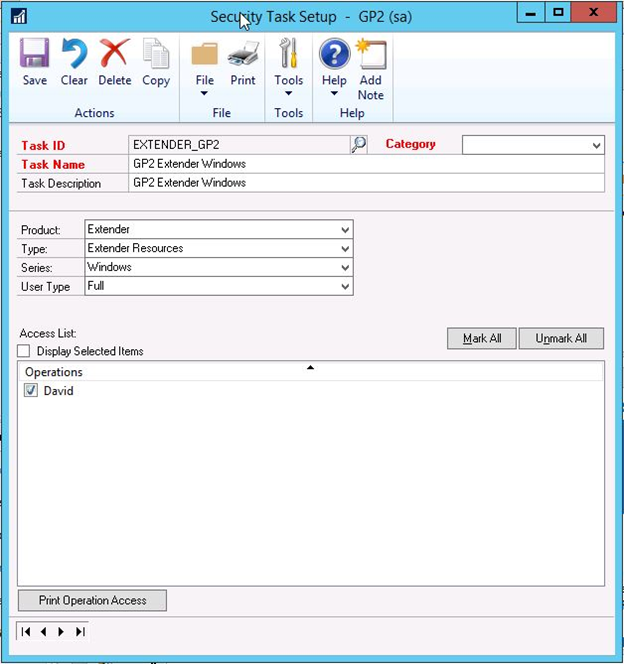 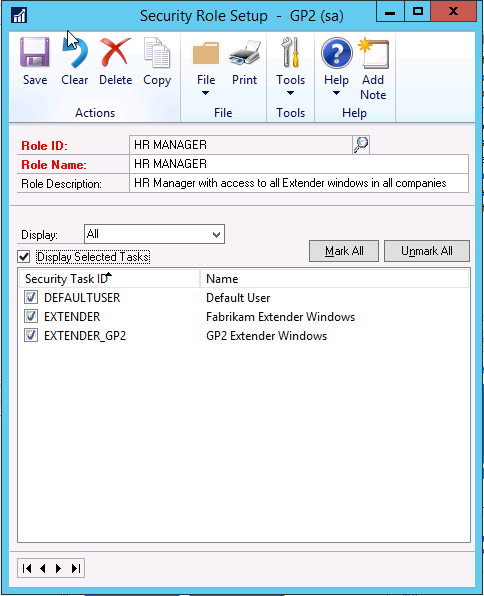 People get confused because you can have a Window with the same ID in multiple companies. It might be the same window that you imported from company to company, or it could be a totally different window that you created from scratch in the second company. Because they are company specific, you cannot have one security task that grants access to the windows in all companies. You need to have company specific tasks that you create in each company, and then you can add those tasks to GP Security roles.

So, my last illustration will make it clearer. I still have my “David” window in both companies, however now I have created 3 additional windows in each company. In my GPTWO company, I have named them “Apple”, “Banana”, and “Cherry”. In my GP2 company I have named them “Aardvark”, “Boy”, and “Cat”

Here is what my Extender windows and my security task look like in my GPTWO company. 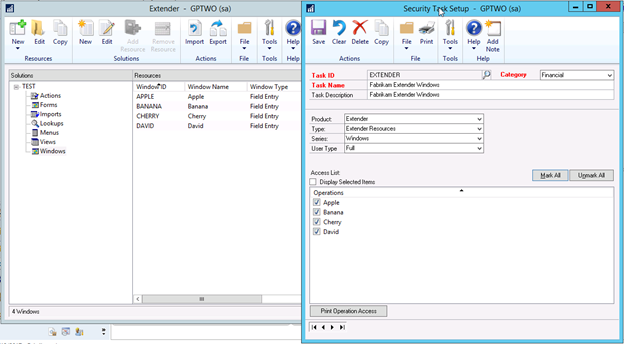 Then in my GP2 company, my Extender windows and security task look like this 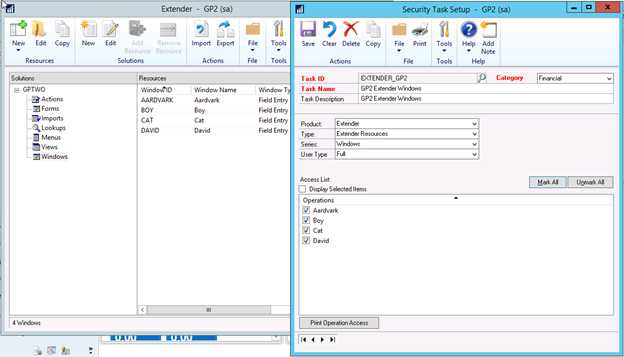