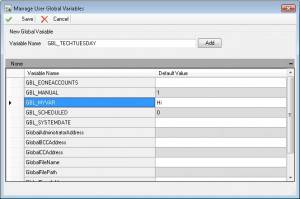 If you set a default value for a variable, it will assign this value to the variable as soon as it is initialized in a map rather than leaving it as a null value. This can be useful if you are storing something that you won’t normally change (like an email address) or if your scripts have issues with null values.

You can set variable defaults per map that override the overall defaults if you want for the specific map. This can be done from the Map Setup screen by going to the Options -> Tasks button. On the Maintain Tasks window, Global Variable Defaults should be selected on the left, and then any of the variable defaults can be changed. 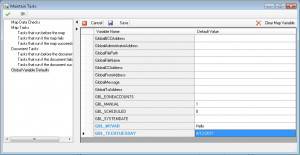 Tech Tuesday: Text Data Source
"All In" the cloud