We recently released a new set of templates for Extender and SmartList Builder to use with Microsoft Dynamics GP 2013. I wanted to outline for you what they are and why I think they are a great resource for everyone to use.

We have updated many of the templates that have been posted for Extender Enterprise and have also made some new ones for you to enjoy.  With these templates, we are hoping that you can take and use some of them right out of the box.  Others may need to be modified to fit your business needs or can serve as an example on how to start structuring something you are trying to build.  Some of the Enterprise templates have Dexterity Coding in them that can be used as sample code if you need for another resource you may be creating.

We aren’t done adding to the list, but here is what is posted today. Please note that not all of the templates will completely work on Standard.  When you download them, be sure you are downloading the appropriate file based on which release of Extender you are using. 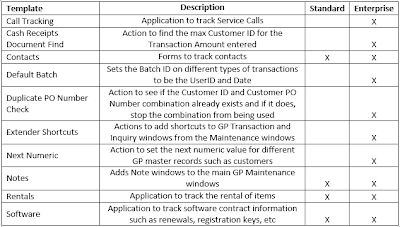 You may also be thinking to yourself, I wonder if they are going to do the same for Excel Report Builder and Navigation List Builder.  To answer your thoughts, YES, we are planning create imports for these two as well that mimic the default setups that come with Microsoft Dynamics GP 2013 for the Navigation Lists and Excel Reports.


Have you tried the new templates? Love ‘em or Leave ‘em? Let us know as we love your feedback!
Posted in: SmartList Builder #Templates