This week our Tech Tuesday is from Jared Dux, he will be answering the question: Will removing a modified SmartList remove it's favorites?

The answer is yes and no – it depends on when the favorite was created. The example below demonstrates what you can expect if you decide to remove a SmartList that was modified using SmartList Builder.

Starting with Microsoft Dynamics GP 2013 SP2 we have the option to modify a canned GP SmartList using SmartList Builder. This is great if you want to add to any of the existing lists that come standard with Microsoft Dynamics GP. However, I have seen many times where a user clicks the Modify button on the main ribbon thinking it is going to modify a favorite - and by using this modify button that is not the case. This will create a brand new list and hide the canned list from displaying in SmartList. At this point any favorites will now be associated with this new list. This new list works just like the canned list, any favorites that existed on the canned list will work on the modified list, and most users will not know the difference. Since this is done unintentionally many times the user wants to revert back to the GP list and is concerned with losing favorites. 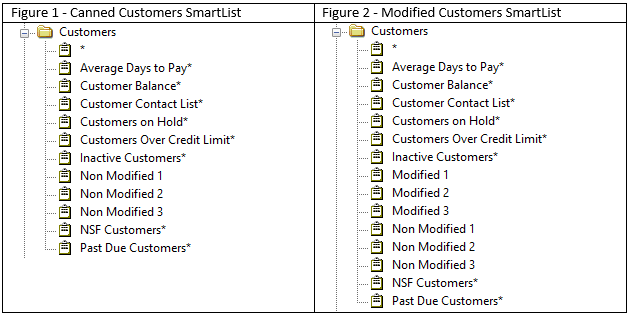 If you have any questions regarding this article or are interested in SmartList Builder feel free to email us at sales@eonesolutions.com or leave a comment below!