The reason for the recent support request was a bit unusual but the intent behind the goal wasn’t all that uncommon – “I to want to add additional functionality beyond what eConnect provides”.

For specific reasons, the customer would like to change the RECV distribution account that defaulted with their Sales Invoice integration.

My first though was that this would be easy.  SmartConnect/eConnect lets you provide specific accounts on the ‘Add line item’ node.  So while the accounts will default from Setup if not supplied, we could set them if desired.

Seems like a slam dunk until I thought about it a minute and then double checked in the GP interface.

The customer said they would like to change the RECV distribution.  Hmm – that is going to be a problem.

So what this tells us is that this distribution type isn’t a distribution account that can be adjusted at the Sales Line Item level.

This is easily verified by looking in Sales Line Item Distribution Entry in Dynamics GP.

We can see that the RECV distribution account is not set at the item detail level which means that this isn’t possible directly through eConnect.

Does that mean that we cannot solve this issue?  No!

There are a couple of solutions to the problem in SmartConnect.

One solution is to manually create the distributions yourself using the ‘add distribution’ mapping.

The problem with that is that with distributions, eConnect is “all or none” as discussed in my previous article.  Since we wanted to specifically set the RECV distribution and would be happy to let eConnect default the rest, this isn’t the best approach for us since it is a fair amount of work to do – especially if taxes and commissions are involved.

Thankfully, with the ability to run Tasks in SmartConnect, we can fix the document after the fact which makes this a much easier approach.

In this situation, I would suggest using an “After Document Success” SQL Task.

For this specific integration, the customer was using a Dynamics GP Rolling Column to provide the SOP Number for their invoices. 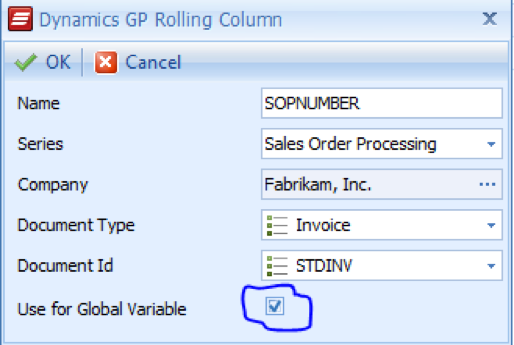 To give us access to that Sales Document Number later in our calculation, we have to make sure to mark the “Use for Global Variable” checkbox as shown.

This tells SmartConnect to copy the results of this rolling column into a system global variable called appropriately, GlobalRollingColumn.

Next, create a new task that will run if the document succeeds.  This will be of type “Run Sql Command”. 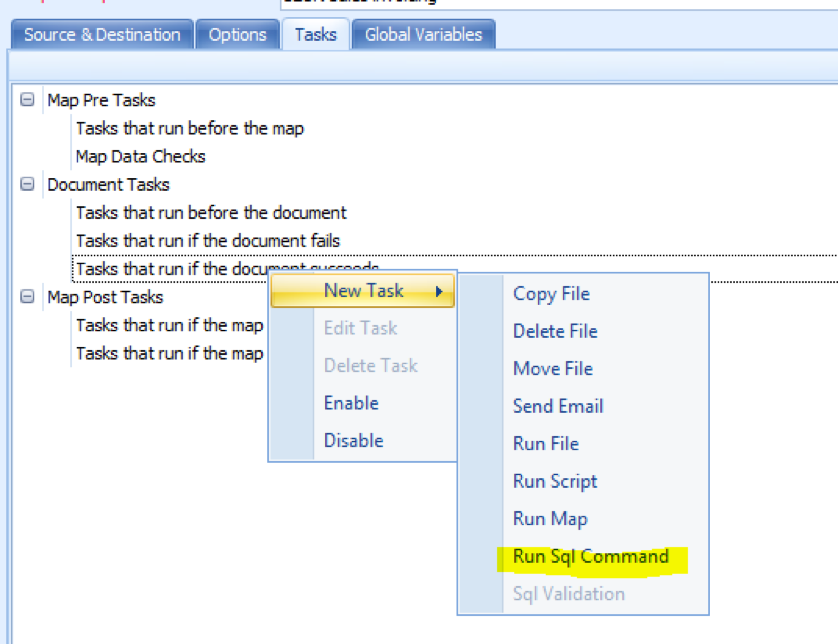 The text of the SQL code is:

The script itself is fairly simple:

The screenshot of the Sql Command task that I created is: 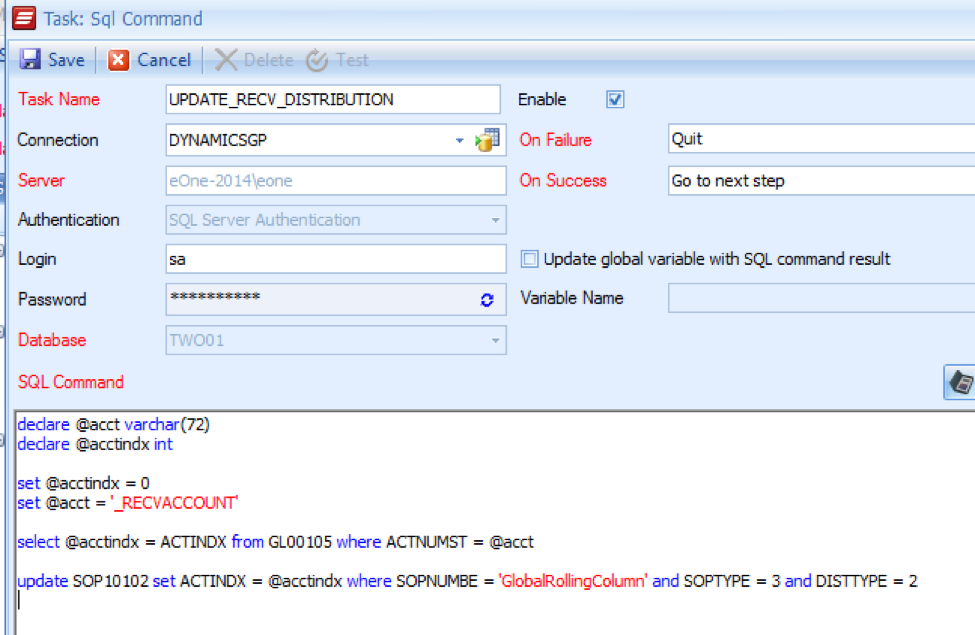 Now when I run the map, eConnect will default the RECV distribution on the Sales Invoice to the default as before.  But the SmartConnect SQL code executed will change it to the specified account.

While this specific task likely won’t be used by our readers because it is a bit unusual, the technique used here can be used in any number of other applications.

A word of warning – I would be remiss if I forgot to note that this is one of those “be very careful with what you are doing in your scripts” moments.

Because you are directly executing SQL against your data – there is no data validation or verification other than what you provide.  So if I had forgotten to filter on DISTTYPE, my SQL code would update all my distributions on that document.  So the word of warning is – TEST AND RE-TEST – before deploying live.

What do companies automate between their ERP and CRM with SmartConnect?
Employee Spotlight: Katie Soderberg - CRM Channel Manager