Today I wanted to share my experiences with Service Based Architecture as we look to implement it internally.

As we look to release a great new product called Service Builder (more about that later), I was tasked with installing Service Based Architecture on our internal Microsoft Dynamics GP system.  Not being real familiar with the SBA install and how it all works, I setout to find all the documentation I could.  I did find some documents, but have to admit, they kind of confused me.  I have given this feedback to the team at Microsoft, so hopefully it will improve.

To start, we use the Web Client, so I had to be careful of that as I didn’t want to take that down as it is working and I am not the most familiar with all the ins and outs of that implementation either.   we also have a 3 server setup (web server, SQL server, and application server).  I first added the SBA features in GP Utilities to create the SQL user.  After that was done, I set out to add the SBA features on our Web server and that went great as well.  No errors, no issues as most of the fields were already filled in.  It was a lot of just entering passwords.  Worried that my Web Client might not be working, I tested that and much to my excitement, it still came up.

At this point, I had no clue where to go, but the manuals I had a section on verifying the installation went well.  It talked about services you should have running.  I thought I was missing one as it listed 3.  Come to find out, the GP Dexterity Service Control and GP Service go on the web server and the GP Dexterity Service – DEFAULT – 14 goes on the application server.  Once I found them, they were all started.  Next step to verify was a help URL.  https://server:port/gpservice/tenants(DefaultTenant)/Help  My to my disappointment, that went no where.  It asked me for a login and I had no clue who to use.  I tried our domain admin, my user which is a GP Power User, and a few others that we had used for the services, but nothing worked.

Dead in the water and now clue where to go now.  I did what most would do and asked around the office to see if others that had done anything with SBA would have a clue.  I didn’t get very far with that.  In comes my friends at Microsoft in GP Support.  They spent a lot of time with me trying to get it to work, but I am happy to say it is up and running finally.

So you may be asking, what did Microsoft try to get it working?  The answer, a lot of things.  Here is what I learned and what we tried. 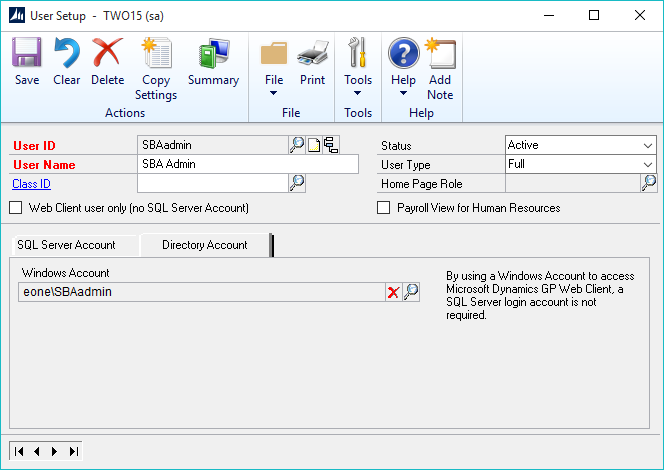 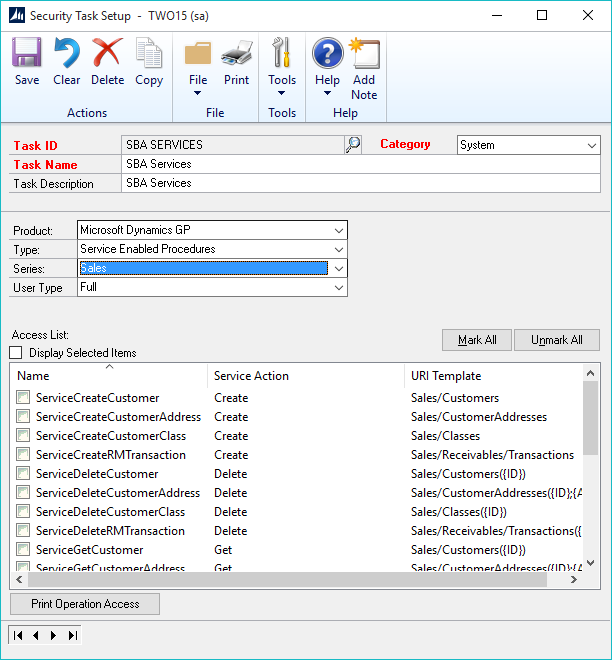 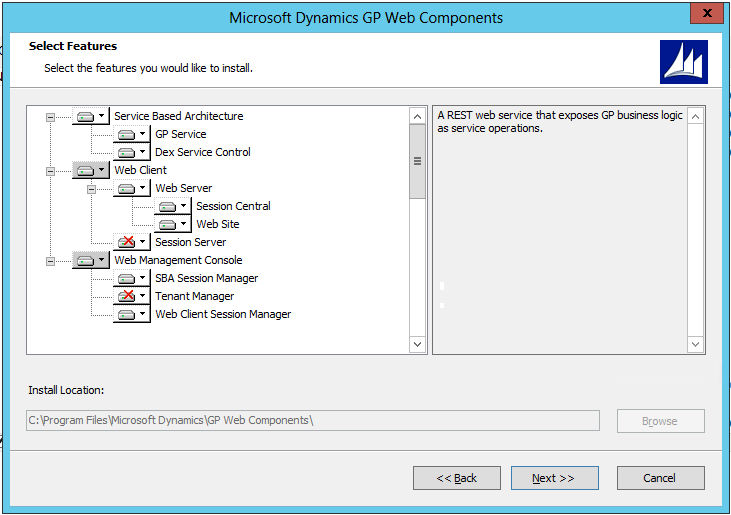 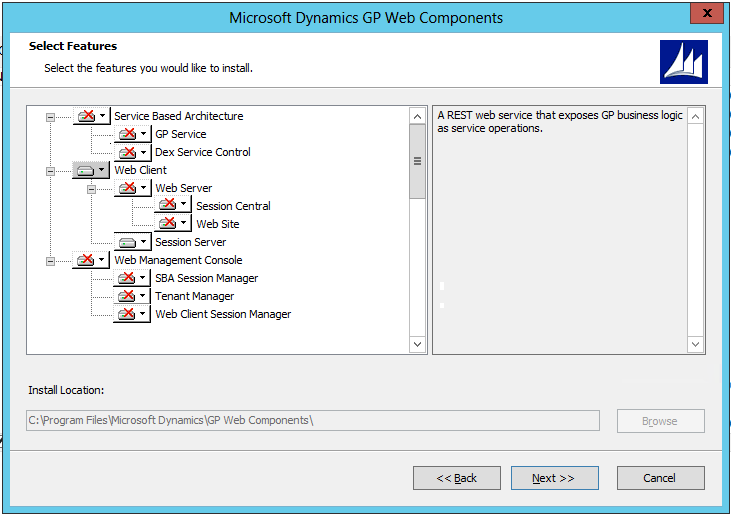 What really got it working though is installing a Microsoft Dynamics GP Client on the Web Server.   Now support wasn’t really able to explain why this worked and didn’t think it should have to be that way, but it was working and I was just happy to see the Help site come up.  I really didn’t care what had to be done to get it all working as long as it was there.  We are going to work with them to figure out the reasoning, but in the meantime, will get started using it internally.  You may actually see it used in a session or two at the GPUG Summit this week if you are lucky enough to be with us in Reno.

I want to give a big thank you out to my friends on the GP support team at Microsoft that stuck with us to get it working as well as my teammates that gave me their insight.  Together, we accomplished and we did give a big sigh of relief when it was running.

Hopefully someone out there can learn from what we tried and use it to get Service Based Architecture running in your environment as well.  It is a lot easier to install when everything is on one server.  We have that running in several different demo images, but this multi-server environment was a bit trickier.

Here is what is installed on each of my servers now.
Web Server 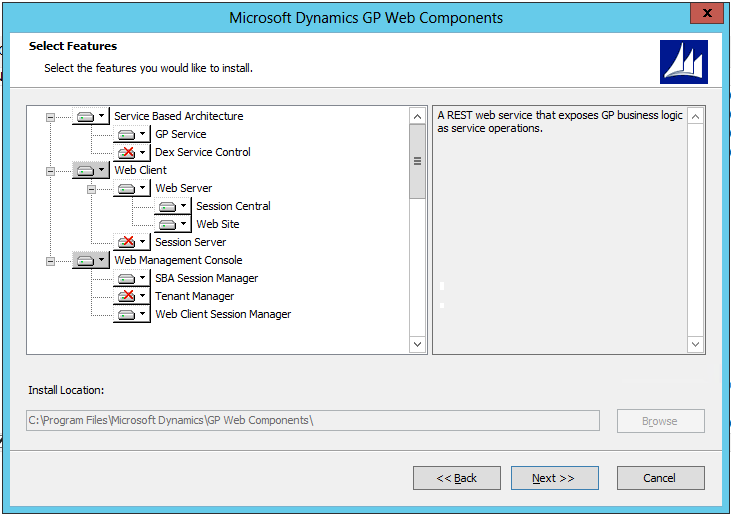 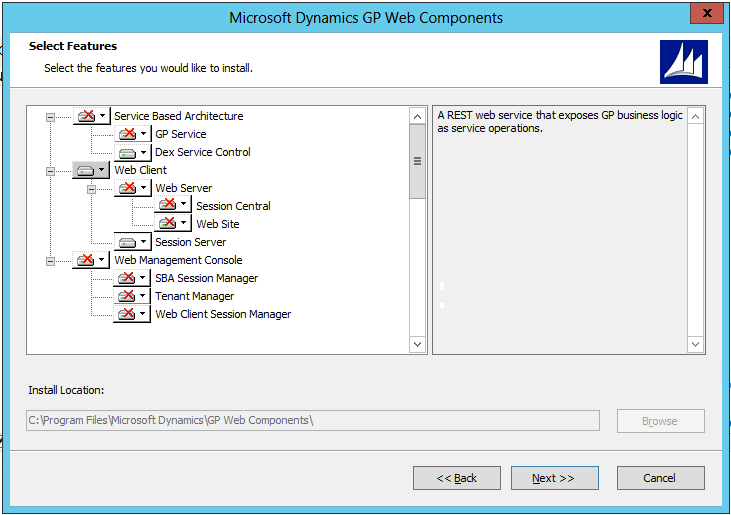