What are Actions?
Extender Actions allow a window or form to perform specific actions based on user input.  Actions were previously available in the Microsoft release of Extender 2010.  The options available were Disable Field, Enable Field, and Run Template. These options will still be available in Extender 2013.
What are the New Actions?
Additional Actions have been added to extend and replace the existing Logic feature in the Extender Enterprise.  While you can still add your own coding scenarios using the Actions, there are some available to replace the common coding scenarios.
Besides the Disable Field, Enable Field and Run Template Actions that were already mentioned, the following action will also be available in Extender Enterprise 2013.  The Actions may differ depending on if you call them from a Form, Window, or the Shared Actions. 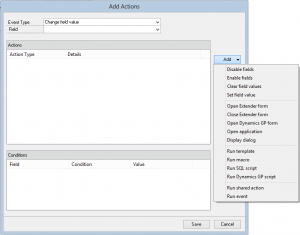 Conditions can also be setup for each Action, defining when that action should be executed.
More action types will be added in later versions, including on to run SmartConnect maps.
Posted in: Extender Extender 2013 #Tech Tuesday