Today I want to take a look at a feature that was added in the latest release of SmartList Builder (18.02.0030).

Having been in the Microsoft Dynamics GP world for many years, I know one of the big things people ask for with SmartList is a way to tell if Favorites are actually being used.  We all know that the number of Favorites a system has in SmartList can grow really quickly.  The Favorites also can be obsolete after time and knowing which ones are still used is really hard.  With SmartList, there is no way to tell when the last time a SmartList was run or who is using it.

So, in SmartList Builder, we built in a feature that will track the Favorites being run in SmartList.  It will track how many times it has been run as well as the last user to run it and when they did so.  When it displays the information, it will also tell you who the Favorite is visible to. 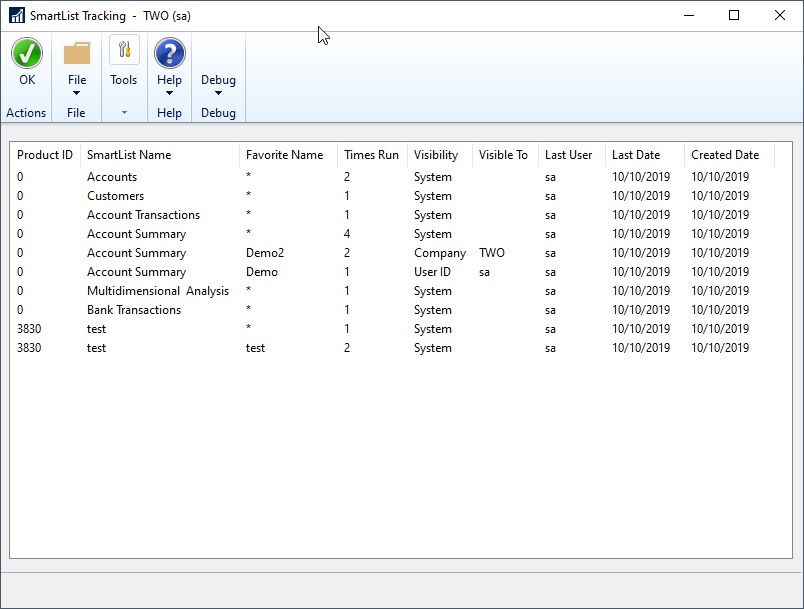 Each time a SmartList Favorite is run in Microsoft Dynamics GP, it will be added to the list in the SmartList Tracking window or updated if it is already there.  It will track all companies and all users that run a SmartList Favorite, whether it be the default (*) list or a Favorite that was created in the system.  The tracking window will be the same no matter which company you are logged into as it is a system wide window.

The SmartList Tracking feature will track the SmartList Favorites being run from the time you install this release of SmartList Builder (18.02.0030).  There is no setup involved for it to start tracking.