We have released Service Pack 1 for Extender 2013 today.

A Huge Thanks goes out to the customers and partners that helped us in testing a few of the fixes in the service pack.

1.  Is this a full install or just an update to a previously posted build?

2.  Can I use this install to install Extender 2013 for the first time?

3.  Can I use this install to update to Microsoft Dynamics GP 2013 from a previous release?

4.  What if I am already using Extender on Microsoft Dynamics GP 2013?

5.  How do I verify that Service Pack 1 is installed: 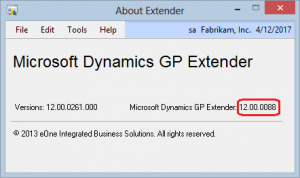 If you have any questions on the installation or usage of Service Pack 1 for Extender 2013, feel free to contact support at 888-319-3663 or support@eonesolutions.com.
Posted in: Extender 2013 #Dynamics GP